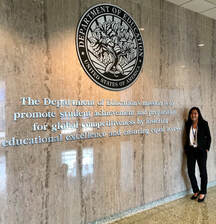 Iris Hinh, 2021 Winner, outside the U.S. Department of Education
​​A principal purpose of the Straus Historical Society, a tax-exempt organization, is the fostering of educational activities directed to public service.

The Straus family has a long history of public service and philanthropy, originating from Lazarus and Sara Straus, their ancestors and their descendants.

Lazarus Straus emigrated from Germany to the United States in 1852. He settled in Georgia, became an itinerant merchant and later opened a successful dry goods business in Talbot County. However, in 1862, when the county issued a presentment accusing Jews of usury, Lazarus and his family relocated to Columbus, Georgia before finally settling in New York. There, the Strauses opened a china and crockery business, L. Straus & Son, and eventually became partners in R. H. Macy & Company. 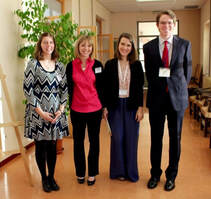 Elizabeth Hutcheson, 2019 Winner (Second from Left)
The Society's activities are shaped by the Straus Family’s involvement in government, commerce, and philanthropy. Beginning in the 19th Century and continuing into the 20th, members of the family have served in governmental positions at the federal and local levels. For example, family members have served in the House of Representatives, as Ambassadors, and as Presidential Cabinet Members. By virtue of their positions, as well as a consequence of their acting as advisors and confidants to a number of American Presidents, family members have been actively involved in the formulation of American public policy for well over 100 years.

Furthermore, in the context of American finance and commerce, family members were the owners of Macy's for nearly 100 years, and they have participated widely in the commercial development of the City of New York and America in general. Family members have also been in a position to assist others less fortunate throughout this period of time. Members of the family have served on the boards of innumerable philanthropic organizations. As a consequence of the family's involvement in this broad spectrum of American life, the Straus family exemplifies and brings to life the true American story and its spirit. It is in this spirit that we wish to encourage young people to engage in public service in these challenging times. 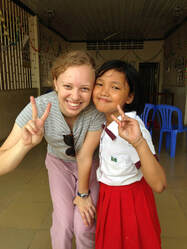 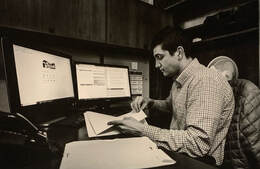 Dillon Cooke, 2021 Winner, working at his desk.
We plan to award four $5,000 scholarships in 2022 to qualified college graduates who have accepted admission to, or are currently enrolled in, a graduate program at the School of International Service at American University, The Fletcher School at Tufts University, and Columbia University School of International and Public Affairs that emphasizes preparing graduate students for a career in public service. The Award is intended to be used for tuition for the 2022-2023 school year, which starts in Fall 2022. Applicants must be U.S. citizens. The award will be based on academic achievement as well as an essay of 500-1000 words that describes a social problem the applicant considers important and offers ideas on steps that might be taken to meet that problem. The award money from the Straus Historical Society will be sent directly to the graduate school of the scholarship recipient's choice. Applicants may be contacted for additional information.

The Scholarship Program is administered through a Straus Historical Society committee that includes a minimum of three board members. The essays will be judged by an Award Committee of outside educators with no family relationship to the Strauses or to SHS board members. The funds for the Scholarship Program will come from contributions from our annual fundraising program.
The application period begins on November 1, 2021 and is due anytime before January 31, 2022. Applications will be evaluated by the Award Committee during February and March, and the Award will be announced in April 2022.
​
Questions or Comments?
Contact Us